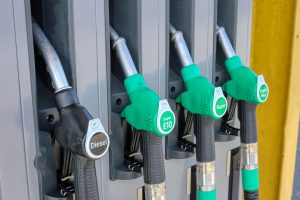 As the rollout continues throughout the summer of 2021 to adopt E10 petrol (with 10% ethanol content) as the standard grade on UK forecourts, it’s a move that could impact hugely on the motorcycling community.

At present, our standard “premium unleaded” is “E5”, which means its gasoline that can be mixed with up to 5% ethanol (simply alcohol under another name).

The new E10 fuel that we are starting to see appear this summer, increases the allowed percentage of ethanol in the fuel to 10%.  E10 fuel is seen as greener than E5, as ethanol is a renewable fuel made from crops rather than fossil fuels it lowers the manufacturing greenhouse gas emissions – known as “well-to-tank”  and it also helps to reduce CO2 emissions in vehicles.

What are the problems with E10 fuel?

We all understand the reason behind E10 fuel…  It can help reduce CO2 emissions, help to reduce the amount of fossil fuels used and, as ethanol is renewable – it can also keep the UK’s own billion-pound bioethanol industry ticking over nicely.

Ethanol and gasoline will mix and burn – but adding more ethanol to our fuel comes with a price!  Our current E5 standard fuel was thought to be the maximum ethanol ratio that bikes designed for conventional fuel could handle safely with no problems – but anything above that level can bring risks to our bikes (especially older carburettor or injected models), as petrol and ethanol burn at different rates and at different air/fuel ratios.

Unlike our 4-wheel counterparts, the average age of a motorcycle is anything up to 15-20 years old and some are from a time when the use of ethanol fuels was not even considered.  Compare a 15 year old motorbike to a car of the same vintage and the car will be equipped with a modern fuel injection system, catalytic converter, oxygen sensors and ECU’s – all capable of compensating for the newer, higher ratio of ethanol in the fuel.  Motorcycles have only been using this technology in earnest for the last 10 years or so and some motorcycles were still using carburettors up until 15 years ago!

It is this stumbling block over vehicle compatibility that has been the main barrier to the introduction of E10 so far. Not all bikes have been approved by their manufacturers for use with fuel with more than 5% ethanol. This is because higher blends of ethanol can cause corrosion of some rubbers and alloys used in the engine and fuel systems of some older vehicles.

For newer bikes, E10 shouldn’t be a problem and most bikes are perfectly capable of running on E10.  Most modern bikes now have stickers on the tank with E5 and/or E10 to show what type of fuel your bike will run with.

If you are still unsure about your bike, you can use the Government checker, although not all bike manufacturers have provided the necessary information.

How can E10 fuel cause problems for my bike 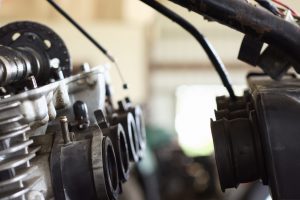 If you own a bike that is E10 compatible already, then there is no need to worry!  The only small downside is that you may see a slight drop in economy (about 1%), even though ethanol has a higher octane rating the petrol (which actually helps to keep combustion temperature down and gives a more controllable burn), it is less energy dense than pure petrol – ultimately meaning that we’ll use a little more.

If you own a bike that isn’t E10 compatible, then there are a few points that will need addressing or paying attention too…

Firstly, ethanol is a solvent, which means any rubber seals, washers, plastic, or fibreglass tanks are at danger of melting if they come into constant contact with E10.  Fuel hoses can be changed, as can fuel filters, but on classic bikes, it means taking the replica fibreglass tanks off and replacing them with an alloy or steel tank.  It may be worth noting to maybe carry a spare set of carb floats if you have a carburettor fed bike that uses metal floats, as E10 loves to eat the solder too! If you own a modern bike that doesn’t have the E5 or E10 sticker on its tank, it may be worth checking with the manufacturer to make sure its compatible)

E10 can also cause corrosion in your fuel system…  As ethanol is hygroscopic (like brake fluid), it absorbs and mixes with water and can even absorb moisture out of the air around it or from condensation.  If left for a long time – then this moisture comes into contact with parts of the fuel system that never see water – leading to corrosion in injectors, jets, filters etc…

If your bike gets regular use and you are regularly running tanks of fuel through, then the water attracting properties of E10 are not a real problem – the only time it becomes a problem is if the bike is left stored for a long time.  If left long enough the water absorbed into the fuel can cause “phase separation”, where the ethanol separates from the fuel and sinks to the bottom of the tank – helping to cause corrosion, but rendering the bike hard to start when you come back to it.

Older bikes with carburettors may also need to be tuned with a jet kit, or by richening the mixture for optimum combustion and to stop the bike running lean. 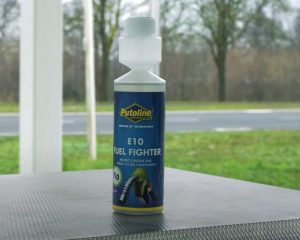 If you have a classic bike, you should really consider changing out any plastic or fibreglass tanks for a steel tank if possible – it may not look as authentic, but it will prevent you having a gloopy mess all over the garage floor!!

Once the tank has been changed, the most obvious items to change then are the fuel lines.  On most older bikes, all of the fuel lines are external and can be changed for an ethanol proof fuel hose, such as Mocal, or APS for example – plus other brands of alcohol resistant fuel hose.

Other rubber components in a bikes fuel system will include fuel filters, in-tank hoses and fuel tap rubbers, although as no-one advertises E10 resistant replacements for the these items, the best we can do is regularly check the condition of these items and replace as necessary.

The last and probably the easiest way to protect your bikes fuel system from E10 fuel is to use a quality fuel additive.  Now we know some people are anti fuel additive!, and it’s true that the fuel companies to add certain ingredients in the fuel to combat corrosion etc – however, there are some quality products out there from renowned brands such as Putoline, Millers, Silkolene & VP Racing that are designed to help combat the damage that can be caused by ethanol.  These Fuel System additives are simply added to the tank each fill up and protect your fuel pipes, seals, jets, injectors etc…

If you don’t plan on using your bike for a while, then it is always recommended to keep your bike stored with a full tank of fuel (mixed with a good quality fuel stabiliser).  Some people prefer to drain their tank and fuel systems completely to avoid any build up in the or injectors etc, but bear in mind that when your tank is empty, it is exposed to air and possible condensation, which can lead to corrosion over long periods of time.

After all the above, it you are unable to future proof your bike for E10 or you are sure it will definitely not run on E10, then there are still a few options to think about…

If your bike will run on the current E5 fuel, then you can still access the E5 option in the form of higher octane “super Unleaded”, as this will be remain E5 and will remain readily available on the forecourt.  The only downside is that it currently costing anywhere from 10 – 15pence per litre more than normal, ‘premium’ unleaded, adding around £2 – £2.50 extra per fill up.

If E5 Super unleaded is still not suitable for your bike, then the only other option is buying a specialist fuel.  These can come in various sizes from 10 to 25 litre containers but are ethanol free fuels that will work in classic vehicles and have a range of varying octane levels from 99 – 109.